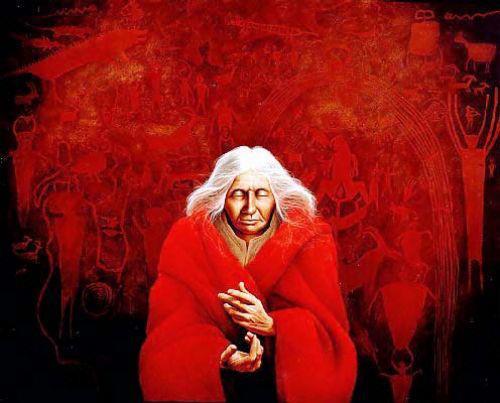 Once upon a time there was a woman who bathed in a river in the woods. It was a cloudy, autumn day, and the air was thick with rain. The woman thought she was alone.


The water was icy cold and the rocks on the riverbed were sharp beneath her bare feet. She quickly dipped her head under the water and then climbed up onto the river shore, where she lay down on the grass. Her entire body tingled, her heart raced, and she closed her eyes, savouring the sweet joy of being alone in the woods.


After a while, the cold crept in under her skin.


She got up and was about to reach for her clothes, which hung on a tree branch, when suddenly she felt something climb onto her foot. It was a scorpion – a large, black scorpion – and he climbed up her leg, ever so slowly, step by step. The woman stood still as a tree, and slowly, he climbed, onto her belly, up her chest, up her throat and finally, he came to a stop and rested on her face.


The woman closed her eyes and listened to the scorpions low, rasping breath, and the sound of her heart, thumping loudly against her chest. She wanted to run but fear paralyzed her. She wanted to tear the scorpion off her face but she did not dare to.


Finally, the scorpion began to speak in a whisper so soft she had to listen very carefully to hear, and to her surprise, he told her a magical spell. “This spell will ensure a wonderful and magical future for you,” said the scorpion, “but beware, if you use it, everything as you know it will change forever.”


When he was done, the woman thanked him for the spell and the scorpion went off on his way.


They say the woman returned to town where she sold all of her belongings and bought a red travelling cloak. They say she became a wise woman, a wild woman, a teller of stories, and she travelled far and wide with her red cloak and magical ways. Like a storm wind, the woman had a way of blowing fresh air into old and dusty places, and changing everything she touched. They say it all came to be, because once upon a time, she met a scorpion in the woods.

The scorpion tale came to me in a dream some years ago and he scared the bejeezus out of me.


The very same day after the dream, I attended a meeting where I was the first to arrive. Waiting for the others, I looked around the room and my gaze drifted to the wall beside me. There, hanging behind a glass frame, was the scorpion. A big, black scorpion! My heart almost hopped right out of my chest!


There he was again! Following me!


He seemed to say, “You’re not getting away so easily, missy!”