Daughter of Hel - an Interview with Margitta Wigren


"She is the beginning and the end, Goddess of life and death… She is the holy well, the whispering wind, the healing fire and the life-giving earth… She is the whole circle of life…"
Over the past few years, I have frequently come into contact with the Norse Goddess Hel through experiences in nature, songs, stories and from my research on Nordic folklore. Hel is commonly known as the Goddess of death and ruler of the underworld, but the name Hel, in Swedish, literally means whole, and she is described by the priestess Margitta "Eldsvan" Wigren as the whole circle of life. Curious to learn more about Margitta's personal journey with Hel, we met recently for an interview at a cafe in Uppsala. Margitta has her roots in the Swedish province of Gästrikland. “All my life people have called me a witch,” says Margitta. “My foremothers were witches and healers, and there is a long history of witch hunting in the villages where I come from.”
Go to your home country and contact the Goddess in your own land...
During Margitta’s first visit to the town of Glastonbury in England, also known as the Isle of Avalon, she met priestess Kathy Jones at the Goddess Temple who said, “Go to your home country and contact the Goddess in your own land. Start your own temple.” A seed of inspiration was planted and five years later Margitta opened her own Goddess Temple in Sweden.
Margitta’s journey in her home country would lead her to Hel – who is still commonly known as the Goddess of death after being pushed down into the underworld first by the Aesir, and later by the Church. “She was pushed further and further down into the underworld, and so it was called the Realm of Hel – or what we know as Hell.”
“Still today most people believe that our Nordic heritage is rooted in the culture and traditions of the Aesir,” says Margitta, “but they are modern in comparison to Hel!  She is what came before the Aesir and the Vanir...”
In Swedish, the word hel literally means ”whole.” Hel is a word with ancient roots in Europe, and it can be found in the English words hole, whole, holy, heal, health, hollow and hold (in Swedish hål, hel, helig, heal, hälsa, ihålig, hålla). Many of these words have a holistic quality and in ancient times all kinds of holes, caves and tunnels in the earth were considered holy. In Norway there are over 4000 place names connected to the word hel. In Sweden there are around 3000, and hel can also be found in Denmark, Finland, Austria, Holland and places all throughout Europe. 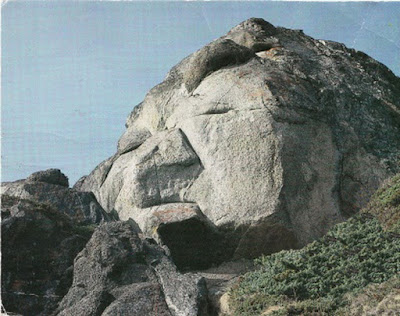 One day when Margitta was standing in her kitchen, looking out the window at the birch trees outside and thinking about starting a temple, the ground under her feet suddenly began to rumble and a voice said, I am Hel, Goddess of life and death...
At first, Margitta was hesitant – “I had only heard about Hel as the Goddess of death before, and so I wasn’t so keen...” but she remembered a book she once saw at a friend’s house, "Hel: den gömda gudinnan i nordisk mytologi" by Gunnel and Göran Liljenroth ("Hel: The Hidden Goddess in Norse Mythology"). Learning about the author’s recent death and extensive research on the subject, Margitta was inspired to continue with their life’s work in her own way, and so she began to journey with Hel.
“I began to listen,” says Margitta, “and returned to Glastonbury to study with Kathy Jones, where I was introduced to the Wheel of the Year, and given a compass and map to navigate with. It took a long time, and at night I received information in my dreams about the Norse goddesses, and so I began to map out a wheel of my own, piece by piece...”
“The journey has certainly been interesting!” says Margitta with a laugh. Learning about the different aspects of the Goddess, and mapping out her own Wheel of the Year dedicated to the Norse Goddesses, she placed Hel in the centre of the wheel. 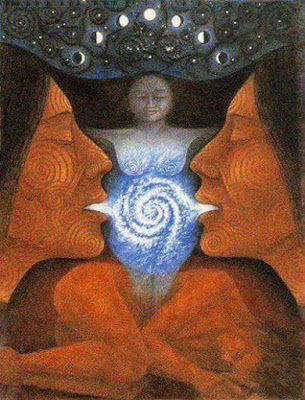 She is the cosmic mother with her cloak of stars...
”Hel is the womb of all life before it is born into being. She is all the elements and seasons. She is the cosmic mother with her cloak of stars. She is also the mist rising up... and once I saw her as a mist rising up from the earth with the moon cycles moving around her head... she had no face...”
“She is blue, like a blue flame. And we all have an inner blueprint before we are given physical form, and she consists of that energy…”
When describing the different faces of the Goddess, Margitta feels strongly about going beyond the definitions, images and archetypes, and experiencing a direct contact with the elements of nature. “We have become so over-intellectualized in our spirituality and need to go back to the basics. In order to form an understanding of anything or anyone, we must have a relationship with it. For example, to learn about the element of fire you actually have to make a fire and form your own relationship with the fire.”
“Often we project ourselves onto the archetypes,” says Margitta, “and so I want to go beyond that, peeling away layer after layer, returning to the core.”
In her own work and teachings with the Wheel of the Year, Margitta focuses mainly on the elements and realms of Mother Earth. “So during the Spring Equinox we go out and we make a fire. What is your relationship to the fire? How do you make a fire? Back to basics…” 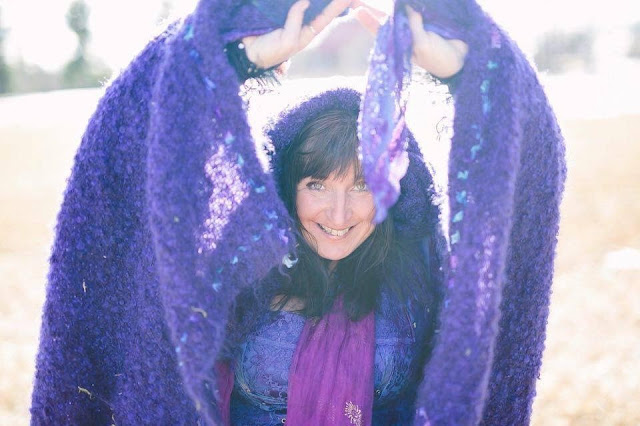 We must return to the Mother on which we stand...
“When Hel was demonised, a great separation was born and that is at the root of all the dysfunction that we see around us in the world today. Now the time has come for us to return to the Mother on which we stand. Each and every one of us. Becoming aware of our own relationship to our souls and our place in Creation. Many people today have lost contact with that relationship...”
A few weeks ago Margitta channelled a message that said: Freedom lies in disconnecting from the frequency of the demon world – the world that humans have created outside of the creation. “We have created the illusion that blinds us,” says Margitta, “and it is the world we gave birth to out of unconsciousness – from our wounds.”
Journeying with Hel hasn’t been easy as she evokes people's inner shadows. Not everyone understands or even wants to know Hel. “The ones who truly understand and feel called by Hel have journeyed deep into their own inner hell, so they know Hel from their own experiences,” says Margitta.
With the demonization of Hel, we also demonized the darkness and became cut off from an essential part of our own being. “We must go down into our own inner hell in order to transform,” says Margitta. “The deeper you go, the higher you will rise. We need to have rich and strong roots in order to stand tall and blossom into the light.”
Today we are living in a time when people have lost contact with their roots, says Margitta. We have become out of tune with our essential tone.
How can we find our way back?
“Go out into the woods. Listen and feel...”


One last question Margitta! One that I always ask... If you could describe yourself as a natural environment, what would it be?
“A mossy forest with old oak trees, rocks and mountains where you can stand looking out over the landscape... but especially to be deep inside an ancient forest full of moss, stones and trees is the most magical thing for me. Real old Swedish forest. I love trees, and especially oak trees.”