To Yoik the Mountain 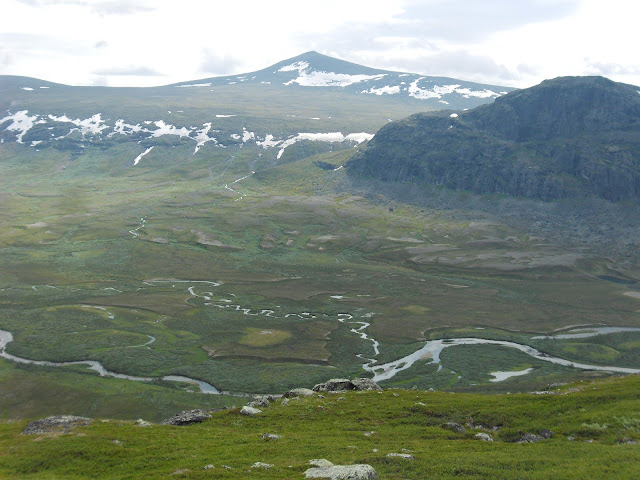 “The yoik lifts the soul flying with thoughts over the clouds.”
-          Paulus Utsi, Sámi poet

In Sámi, to yoik is to invoke someone or something with song. “To yoik is to live, and to live is to be yoiked,” says the yoik singer Krister Stoor. “One does not yoik about something – you yoik a person, an animal or a place in nature. To yoik is to connect with something and to yoik someone’s song is to become one with that person.”
The Sámi author Johan Turi writes that the Sámi people learnt the art of yoiking as well as many other skills from the ulda spirits who live under the earth. “Sámi singing is called yoiking. It is a practice for recalling other people. Some are recalled with hate, and some with love, and some are recalled with sorrow. And other times such songs concern lands or animals: the wolf, and the reindeer, or wild reindeer,” writes Turi in his famous book – Muitalus sámiid birra – first published in 1910, and the first book about the Sámi people written from a Sámi perspective.

When the Sámi people were Christianized the tradition of yoiking was forbidden. The Sámi drums were also forbidden and taken away to be burnt in fires or given away as exotic gifts to European aristocrats. Some hid their drums in secret places and made small drums that you could hide in your pocket when priests came looking. In a society dominated by the church, yoiking and drumming was done in solitude, high up in the mountains or deep in the woods, faraway from prying eyes.
The yoik had many functions, both spiritual and practical. It was a good way of calming the reindeer and keeping predators away. It was also used by the noajdde (shaman) as a way of entering a trance and travelling between worlds. Yoiking was also a way of remembering someone who had passed away. Often a child was given their own yoik by a family member.
The German professor Johannes Schefferus was called to Sweden in the 17th century to write about the Sámi people and their culture. The Sámi student Olof Mattson Sirma provided the professor with two yoiks which were later published in “Lapponia” which first came out year 1673. The book was translated to several languages (although it was not translated into Swedish until 1956) and it became well-spread throughout Europe, and in that way two Sámi yoiks became a part of the European literature of that time.
The Sámi artist and yoik singer Nils-Aslak Valkeapää describes the yoik as “a ring circling in the air,” and “its structure can be compared to water moving in harmony with the landscape or with the wind caressing the face of the mountain.”
Famous Sámi yojk singers include Sofia Jannok, Mari Boine and Jon-Henrik Fjällgren, among many others. Today yoik songs can be heard playing on the radio and many young Sámi are continuing the tradition as well as yoiking in new ways.

The sound of yoiking was what first pulled me towards learning more about Sámi culture. Hearing the sound made me feel so at home, especially when hearing yoiks about nature. I have my own way of yoiking and tuning in to the songs and stories of the earth, and I believe that this is something we all have the natural ability to do.
Listen, the earth is singing. Can you hear the song of the mountain? The song of the woods? The tree, the river, the rock?
Go into nature and listen. Truly listen. Let nature be your teacher. You don’t need to read any books or go any courses. Just go outside, breathe, listen, and above all, have patience. Slow down your pace. With time, patience and respect, nature will show you the way home.

Sofia Jannok "Yoik of the Wind"

Documentary about the Sámi artist and yoik singer Nils-Aslak Valkeapää:


Turi, Johan (2012) An Account of the Sámi, Translated by Thomas A. DuBois, ĈálliidLágádus, Karasjok